The trip began with a quote: When was the last time you did something for the first time?

This is a photography project I did during my trip to Easter Island in 2013. Wielding a camera and tripod, I explored this beautiful place in the middle of nowhere, camping and riding a bike for the next five days.

A remote, bleak speck of rock in the middle of the Pacific, Easter Island, or Rapa Nui, has mystified the world ever since the first Europeans arrived in 1722.

How and why did the ancient islanders build and move nearly 900 giant statues or moai, weighing up to 86 tons? And how did they transform a presumed paradise into a treeless wasteland, bringing ruin upon their island and themselves?

NOVA explores controversial recent claims that challenge decades of previous thinking about the islanders, who have been accused of everything from ecocide to cannibalism. Among the radical new theories is that the islanders used ropes to “walk” the statues upright, like moving a fridge. With the help of an accurate 15-ton replica statue, a NOVA team sets out to test this high-risk, seemingly unlikely theory—serving up plenty of action and surprises in this fresh investigation of one of the ancient world’s most intriguing enigmas.

Linguists estimate Easter Island’s first inhabitants arrived around A.D. 400, and most agree that they came from East Polynesia. The archeological record suggests a somewhat later date of settlement, between 700 and 800.* As early as 5500 B.C. people in Melanesia were voyaging in boats and trading in obsidian. The eastward movement of people continued until Tahiti and the Marquesas Islands were reached, at least by A.D. 300. Voyaging canoes moved east, north, and south to ultimately inhabit Easter Island, Hawaii, and New Zealand, respectively, all in the short period of about 400 years.

When Europeans first explored the Pacific and sailed from island to island, they noticed that the people of various islands, no matter how distant, had similar customs. Inhabitants looked similar in appearance, and they were often able to understand one another, even though they came from islands thousands of miles apart. These linguistic links point to a genealogical bond that ties the people of the Pacific to one another. Indeed, in 1994, DNA from 12 Easter Island skeletons was found to be Polynesian. 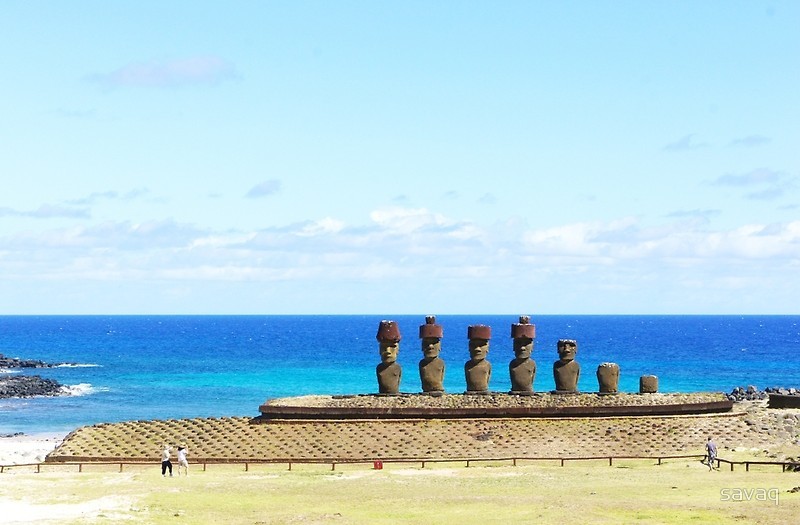 Legend has it that the very first Rapanui, as the people of Easter Island are known, came ashore at Anakena, a beach on the island’s north side.

According to an Easter Island legend, some 1,500 years ago a Polynesian chief named Hotu Matu’a (“The Great Parent”) sailed here in a double canoe from an unknown Polynesian island with his wife and extended family. He may have been a great navigator, looking for new lands for his people to inhabit, or he may have been fleeing a land rife with warfare. Early Polynesian settlers had many motivations for seeking new islands across perilous oceans. It’s clear that they were willing to risk their lives to find undiscovered lands. Hotu Matu’a and his family landed on Easter Island at >Anakena Beach, (Picture). Te-Pito-te-Henua, “end of the land” or “land’s end,” is an early name for the island.

On Rapa Nui, the more modern, and local, name for Easter Island, large palm forests flourished. Upon arrival, early Rapanui settlers would have planted the plants that they brought with them: banana trees, taro root, and perhaps even the sweet potato.

According to Thor Heyerdahl, people from a pre-Inca society took to the seas from Peru and voyaged east to west, sailing in the prevailing westerly trade winds. He believes they may have been aided, in an El Niño year, when the course of the winds and currents may have hit Rapa Nui directly from South America. In 1947, Heyerdahl himself showed that it was possible, at least in theory; using a balsa raft named Kon Tiki, he drifted 4,300 nautical miles for three months and finally ran aground on a reef near the Polynesian island of Puka Puka. 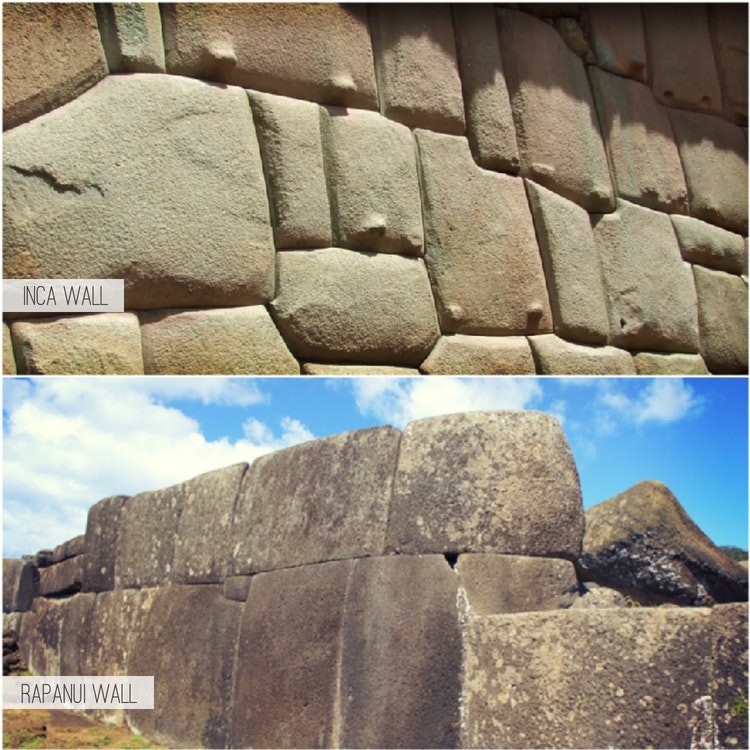 There is little data to support Heyerdahl. Archeologist Jo Anne Van Tilburg, who is unconvinced by Heyerdahl’s theory, notes that “all archeological, linguistic, and biological data” point to Polynesian origins in island Southeast Asia. Interestingly, though, there are stone walls on Rapa Nui that resemble Inca workmanship. Heyerdahl contests that the scientific community has not addressed the fact that these walls are distinct in their Andean style. Even Captain Cook in 1774 noticed the quality of stonework in the supporting walls near the moai: “The workmanship is not inferior to the best plain piece of masonry we have in England. They use no sort of cement; yet the joints are exceedingly close, and the stones morticed and tenanted [sic] one into another, in a very artful manner.”

So how to explain the sweet potato and superb stonework? It may be that the Polynesians sailed as far as South America in their migratory explorations, and then, some time later, turned around and returned to the south Pacific, carrying the sweet potato with them. Or perhaps there were visits from Peruvians who brought the sweet potato and their skilled understanding of stone masonry with them. Undisputed is the fact that the sweet potato was, for the Rapanui people, “the underpinning of Rapanui culture. Literally, it was, according to Van Tilburg, “fuel for moai building.” 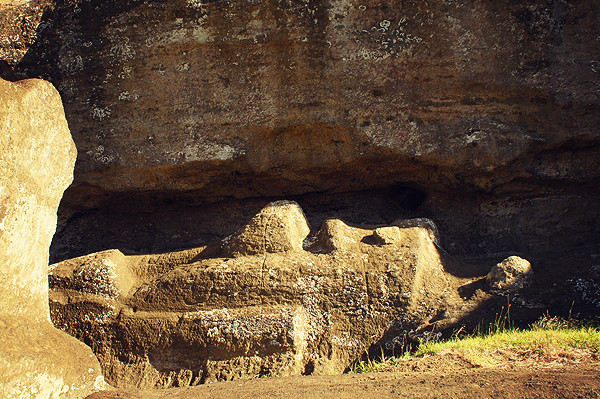 From at least 1000 to 1680, Rapa Nui’s population increased significantly. Some estimate the population reached a high of 9,000 by 1550. Moai carving and transport were in full swing from 1400 to 1600, just 122 years before first contact with European visitors to the island.

In those 122 years, Rapa Nui underwent radical change. Core sampling from the island has revealed a slice of Rapa Nui history that speaks of deforestation, soil depletion, and erosion. From this devastating ecological scenario it is not hard to imagine the resulting overpopulation, food shortages, and ultimate collapse of Rapa Nui society. Evidence of cannibalism at that time is present on the island, though very scant. Van Tilburg cautiously asserts, “The archeological evidence for cannibalism is present on a few sites. Analysis of this evidence is only preliminary in most cases, making it premature to comment on the scope and intensity of the practice as a cultural phenomenon.”

Most scholars point to the cultural drive to complete the colossal stone projects on Rapa Nui as the key cause of depletion of the island’s resources. But it wasn’t the only one. Palm forests disappeared, cleared for agriculture as well as for moving moai. Van Tilburg comments, “The price they paid for the way they chose to articulate their spiritual and political ideas was an island world which came to be, in many ways, but a shadow of its former natural self.” 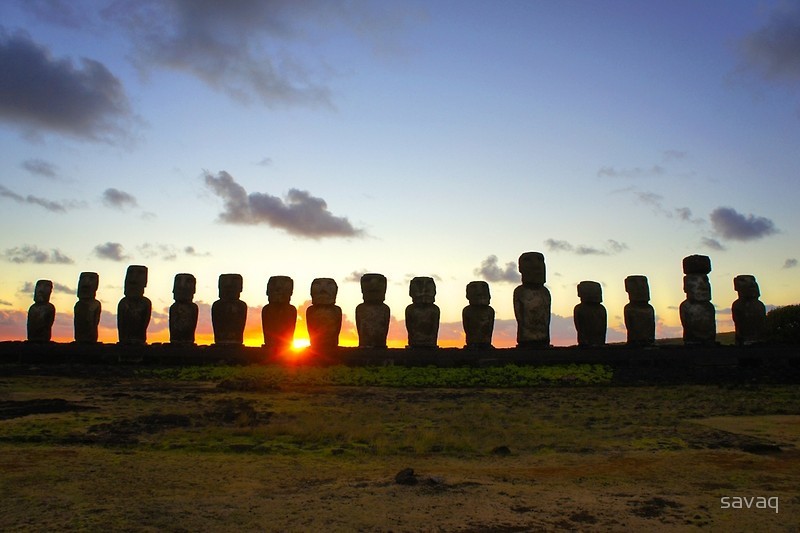 The world that the Europeans first observed when they arrived on Rapa Nui in 1722 has puzzled us for centuries. What was the meaning of the massive stone human statues on the island? How did they transport and erect these multi-ton statues? And, finally, how did the original inhabitants arrive on this remote island?